THE MICHAEL MERRITT AWARD FOR EXCELLENCE IN DESIGN AND COLLABORATION

The Michael Merritt Award, a national award unique in its emphasis on excellence in both design and collaboration, is presented annually to professional theatrical designers. The award is given to a scenic, costume, lighting, sound, or other media designer. 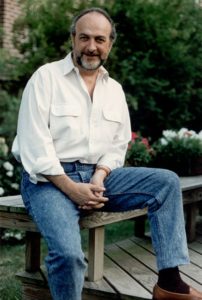 Designer, artist, teacher, colleague and friend, Michael Merritt was respected by those whose lives he touched.   While Midwestern by birth, education and sensibility, he actually belonged to the larger world of the theatre.  His work and life spoke so resoundingly to so many of his collaborators and friends that the Michael Merritt Endowment fund and awards were created after his untimely death to honor excellence in design and collaboration.  His designs enhanced and illuminated well over a hundred productions in the fields of theatre, television and film.   His teaching, friendship and artistic fellowship inspired and enriched many lives.  The following quotes from a few of his friends and collaborators may help to illustrate the artist and person that was Michael Merritt.

In 1973, a group of us had a theatre on Wells Street … Michael did the sets.  With no money and with even less material he made his magic.  The sets moved, they became one of the tale tellers in our little story theatre …. he would build them all.  He would take you in as his apprentice and he would show you all the tricks he knew and he would let you watch while he did things he didn’t even know were tricks.  They just came naturally to him.  The designing and creativity seemed to come as easily to Michael just as the love and affection that he showed for his friends.

Michael Merritt was an excellent listener.  I remember trying to describe Helen of Troy’s entrance in Troilus and Cressida.  “This is a major moment.  Thousands of men were dying during the eleven years of this war for this babe.  The moment needs to be sensual and unforgettable.”  It took Michael all of a few seconds to come up with the idea that to this day people still remember.  Across the entire upstage wall of the theatre hung a 20 x 30 foot royal blue scrim.  From the distance the audience saw someone take up the bottom of the scrim, a follow spot from upstage hits this blond wild head of hair and perfect body dressed in a white satin gown.  She holds the cloth over her head and as she walks downstage it floats down behind her as she carries it towards the audience.  Erotic, simple and inexpensive.  Theatre at its most dynamic.

Michael was a generous, gentle and demanding teacher.  He taught by example and advised young actors, designers and directors to seek broad experience in life as well as in school.  His own education was eclectic; he had entered college as a math and physics major and graduated with a major in art history.  He also studied philosophy, drove an ambulance in Vietnam and worked as a carpenter.  He excluded nothing from the process of design.  In the multi-disciplined course he created at Columbia College, students read Origin of Species along with Hedda Gabler and studied the paintings of Vermeer and Titian in preparation for discussions of Shakespeare.  Never an instructor, always a teacher, Michael brought scholarship, conviction, insight, inspiration and generosity to every project.