This annual award recognizes the most outstanding professional designer exhibit at the Designer Expo.

To exhibit your portfolio at the Merritt Design Exposition, contact exhibit@merrittawards.com

Eligible exhibits for the Michael Philippi Prize for Best Exhibit: Professional Designer will be adjudicated based on the following criteria:

Designs – Originality & Creativity:
Do the designs exhibited demonstrate an innovative and/or a compelling artistic voice?

Exhibit – Originality & Creativity:
Does the exhibit itself contain innovation and/or other evidence of originality?

Sustained Activity & Accomplishment:
Does the exhibit demonstrate substantial scope and variety across the work of the designer?

Quality and Professionalism:
Do the exhibit materials and presentation demonstrate mastery of technical/craft skills appropriate to the design discipline? 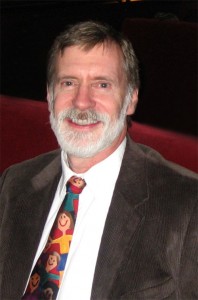 Michael Philippi passed away suddenly on his way to a technical rehearsal for High Holidays at Goodman Theatre on October 27, 2009.

He had most recently designed lighting at Goodman Theatre for Desire Under the Elms as well as King Lear, Finishing the Picture, A Life in the Theatre, Heartbreak House, Blue Surge, Boy Gets Girl, Somebody Else’s House, On the Open Road and Pal Joey. He also designed scenery and lighting for Goodman productions of Moonlight and Magnolias and The Goat or, Who is Sylvia?

Other Chicago credits include designs for Northlight Theatre, St. Nicholas Theatre Company, Court Theatre, Remains Theatre Ensemble, Wisdom Bridge Theatre and Chicago Shakespeare Theater on Navy Pier, where he designed sets for Cymbeline and Troilus and Cressida. Philippi’s Broadway designs include the Goodman productions of Desire Under the Elms, Death of a Salesman and The Speed of Darkness.

His New York credits include Boy Gets Girl at Manhattan Theatre Club, Blue Surge at the Public Theater, and Frank’s Home and Breath, Boom at Playwrights Horizons.

His international credits include The Iceman Cometh at Dublin’s Abbey Theatre. He has received Jeff Awards for Terra Nova and In the Belly of the Beast, both at Wisdom Bridge Theatre, and Hollywood Drama-Logue Awards for Kabuki Medea at Berkeley Repertory Theatre and Changes of Heart at Mark Taper Forum.

“The magic of Michael’s light touched your life,” said Bob Falls. “He was a gifted artist who responded with an extraordinary, innate understanding of and appreciation for every play he was designing.”

Goodman Theatre hosted a Memorial Service in tribute and honor of his memory on December 14, 2009.